The NASCAR Xfinity Series begins its second half of the 2016 season with Saturday’s AutoLotto 200 at New Hampshire Motor Speedway in Loudon, N.H.

PRERACE SCHEDULE: The Xfinity garage opens at 7 a.m. The driver/crew chief meeting is at 1:30 p.m. Driver introductions are at 3:30 p.m.

TV/RADIO: NBCSN will broadcast the race with its coverage beginning at 3:30 p.m. Performance Racing Network’s radio broadcast begins at 3:30 p.m. and also can be heard at goprn.com. SiriusXM NASCAR Radio will have PRN’s broadcast.

FORECAST: The wunderground.com site predicts a temperature of 85 degrees at race time with a 15 percent chance of rain.

LAST TIME: This will be the 30th time that the NASCAR Xfinity Series has raced at New Hampshire Motor Speedway. In the most recent NXS event there (July 18, 2015), Denny Hamlin dominated, leading 145 of 200 laps. Hamlin took the lead for the final time from Austin Dillon with 22 laps to go and held off Dillon the remainder of the way to earn the win. Brad Keselowski finished third, followed by Kyle Busch and Daniel Suarez. 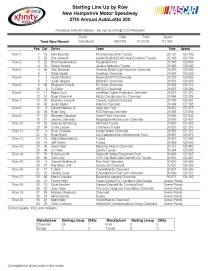