Toyota drivers made up four of the top five fastest positions, with Kurt Busch’s Chevrolet the only non-Toyota car in that group.

Alex Bowman, filling in for Dale Earnhardt Jr. (concussion-like symptoms), was 13th fastest (132.172) in this session.

Next up for the Sprint Cup drivers: qualifying at 4:45 pm ET, which will be televised live on NBCSN.

Here’s how the first Sprint Cup practice session played out: 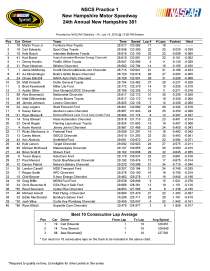