NASCAR fans can have their name appear on the deck lid of Michael Annett‘s No. 46 Chevrolet in the Aug. 7 Sprint Cup race at Watkins Glen International with a monetary donation.

In partnership with St. Jude Research Hospital, Annett’s primary sponsor for the race, fans can donate a minimum $46 at this link, and their names will appear on the HScott Motorsports’ car.

Fans have until July 22 to make their donations.

Annett is currently 37th in the Sprint Cup point standings. He has two starts at the New York road course, finishing 31st in both races.

A native of Des Moines, Iowa, Annett will serve as honorary chairperson for the St. Jude Tournament of Hope golf tournament on Aug. 8 at Glen Oaks Country Club in West Des Moines. 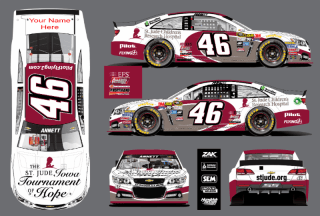