A Pennsylvania jury ruled Monday for Pocono Raceway and NASCAR in lawsuits brought against both by the widow of a fan killed and others injured in lightning strikes at the track on Aug. 5, 2012.

The case was heard in the Court of Common Pleas of Philadelphia County.

Brian Zimmerman, 41, of Moosic, Pa., was killed when he was struck by lightning in the parking lot behind the frontstretch grandstands. A second strike also hit the parking lot. Ten fans were injured.

The three lawsuits alleged that if the race had been stopped when a severe storm warning was first issued, it would have provided sufficient time for those struck to have found proper shelter.

A severe storm warning was issued at 4:12 p.m. The track issued warnings at 4:21 p.m. that high winds and lightning were on the way.

The Trial Work Sheet in the case for all three lawsuits showed that even though the jury ruled for the defendants, it found Pocono Raceway negligent. However, on the question if “the negligence of Pocono International Raceway was a factual cause of any harm to … Brian Zimmerman,’’ the jury checked the box “No.’’ The jury also voted that way in the other two cases brought by fans injured by lightning.

The jury also stated it did not find NASCAR negligent in all three cases.

A spokesperson for Pocono Raceway said track officials had no comment on the jury’s decision.

NASCAR and tracks have made warnings for severe storms and lightning more noticeable, by making multiple announcements and posting on video boards and social media. 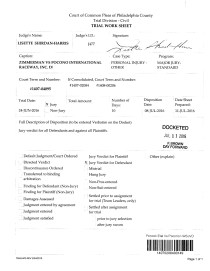 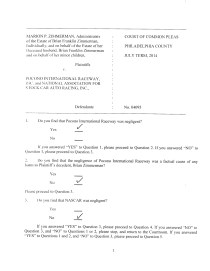 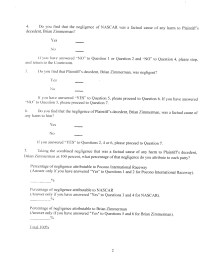 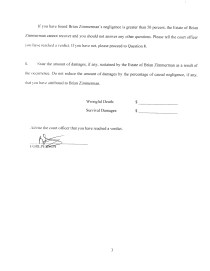