While Kevin Harvick leads the Sprint Cup point standings, Brad Keselowski is at the top of the grid for the Chase for the Sprint Cup after earning his fourth win of the year Saturday night at Kentucky Speedway.

Tony Stewart strengthened his position in the top 30 in points and his place on the Chase grid with his fifth-place finish at Kentucky.

The only driver to drop out of the top 16 on the grid was Ryan Blaney. The rookie is 19th behind Trevor Bayne and Kasey Kahne after crashing with Chase Elliott early in the race and finishing 35th. Jamie McMurray moved up one spot into 16th. 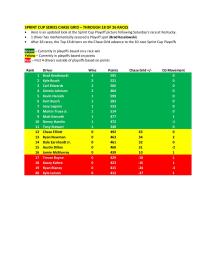