After a close finish in last weekend’s race at Daytona, the Xfinity Series returns to action tonight in the Alsco 300 at Kentucky Speedway.

It will be the 16th race of the 2016 season and the first of two events at Kentucky this year.

START: Retired USAF Brigadier General Dan Cherry will give the command for drivers to start their engines at 8:37. The green flag is set for 8:45.

PRERACE SCHEDULE: The Xfinity garage opens at 11 a.m. The driver/crew chief meeting is at 6:15 p.m. Driver introductions are at 8 p.m.

TV/RADIO: NBCSN will broadcast the race with its coverage beginning at 8 p.m. with Countdown to Green. Performance Racing Network’s radio broadcast begins at 8 p.m. and also can be heard at goprn.com. SiriusXM NASCAR Radio will have PRN’s broadcast.

FORECAST: The wunderground.com site predicts a temperature of 80 degrees at race time with a 15 percent chance of thunderstorms. 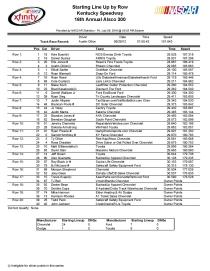