SPARTA, Ky. — Storms washed out Sprint Cup qualifying Friday at Kentucky Speedway, where owner points were used to set the field for the Quaker State 400.

Jimmie Johnson will start ninth despite being in a backup No. 48 Chevrolet because of a crash in practice. The six-time series champion retained the starting position by making laps in practice after qualifying was canceled.

This is the third time qualifying has been canceled in six Sprint Cup races at Kentucky, including last year. Kyle Busch won the 2015 race as well as the 2011 inaugural event when qualifying also was scrubbed. 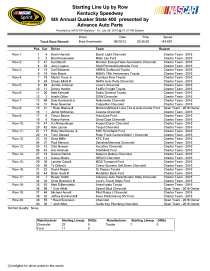