After clocking in second to teammate Daniel Suarez during the first two rounds of Xfinity Series qualifying at Kentucky Speedway, Busch laid down a lap of 187.318 mph to win the pole for the Alsco 300. It is Busch’s fourth Xfinity pole of the season and the 52nd of his career.

“Our NOS Energy drink Camry has been really fast since we’ve been here,” Busch told NBCSN. “It’s good to start on the front row, it gives us a good shot to get to Turn 1 and lead the field a little bit. But from there I have no idea. Do you ride? Do you save? What pace do you need to run to make sure the tires stay underneath you? And all those sorts of things, so we’ll see how it goes.”

After advancing to the second round of qualifying, Ty Dillon became the third Richard Childress Racing car to find trouble at Kentucky. Dillon got loose in Turn 3 when he got outside the groove and ended up scraping the wall in Turn 4. He did not post a qualifying time and was scored 23rd. The team plans to repair the damage. 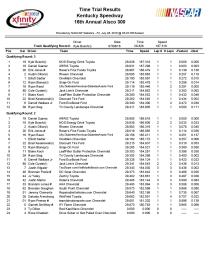 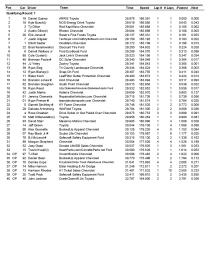