Carl Edwards paced an abbreviated third practice for the Sprint Cup Series on Friday afternoon at Kentucky Speedway with a lap of 188.633 mph. Edwards was also fastest in the first practice held on Thursday. Toyota teammate Martin Truex Jr. was second fastest at 187.774 mph with Kyle Larson (187.487), Kyle Busch (187.123), and Austin Dillon (187.097) completing the top five.

Busch had a wild ride off Turn 2 during the session when his No. 18 M&M’s Toyota Camry got loose. The defending winner of the Quaker State 400 was able to save the sliding car and keep it off the wall.

Jimmie Johnson, who crashed in the Friday morning session, made it on track in his backup car to clock in eighth fastest with a lap of 186.561 mph. The No. 48 team used a lengthy rain delay to prepare the car for a practice that was originally scheduled for 1:30 p.m. Johnson was then one of the first on track after the drying process was complete and the session began at 3:45 p.m.

NASCAR canceled Sprint Cup qualifying (scheduled for 6:45 p.m.) and will give the series a final practice during that time.

Here are the speeds from the third session: 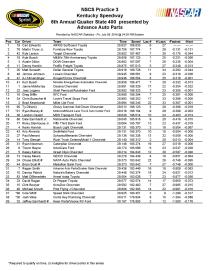