The No. 05 Chevrolet posted a top speed of 179.099 mph during the 28 laps Kligerman recorded in the session that was delayed two hours by rain. There will be two practice sessions instead of the originally scheduled three.

Travis Kvapil was involved in one crash in Turn 4 during the session and was cleared from the infield care center. 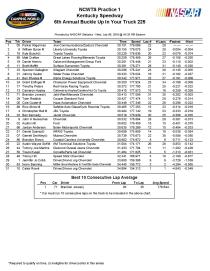