After enjoying last weekend off, the Xfinity Series returns to action tonight with the Subway Firecracker 250 at Daytona International Speedway.

It will be the 15th race of the 2016 season for the circuit and the 50th Xfinity race at one of NASCAR’s signature tracks.

START: Subway Franchisee and retired U.S. Air Force Sgt. Kelly Miller will give the command for drivers to start engines at 7:38 p.m. Green flag is set to wave at 7:50 p.m.

PRERACE SCHEDULE: The Xfinity garage opens at noon. The driver/crew chief meeting is at 3:45 p.m. Driver introductions are at 7 p.m.

NATIONAL ANTHEM: Musician First Class David Kraftchak, vocalist of the U.S. Navy Band of the Southeast, will perform the anthem at 7:31 p.m.

TV/RADIO: NBCSN will broadcast the race with its coverage beginning at 7:30 p.m. (NBCSN Countdown to Green airs at 7 p.m.). Motor Racing Network’s radio broadcast and at MRN.com will begin at 7 p.m. SiriusXM NASCAR Radio will carry the MRN broadcast.

FORECAST: The wunderground.com stie predicts a temperature of 82 degrees at race time with a 60 percent chance of rain.

LAST TIME: One day before he’d be involved in a horrific wreck in the Coke Zero 400 Sprint Cup race, Austin Dillon won the Subway Firecracker 250 on July 4, 2015. Dillon led just nine of 104 laps. Elliott Sadler finished second, followed by Chase Elliott, Kasey Kahne and Benny Gordon. Brian Scott dominated the race, leading 84 laps but was involved in a 11-car race on Lap 97 and finished 23rd, three laps off the pace. 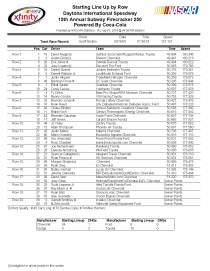