Jones (193.353 mph) and David Ragan (193.307) — substituting for the injured Matt Tifft — were the only drivers over 193 mph before the scheduled 55 minute session was cut short after just over 20 minutes of time on track due to the threat of lightning in the area.

The second Xfinity Series practice session of the afternoon is scheduled for 4 to 4:55 p.m. ET.

Here’s how the first abbreviated practice session played out: 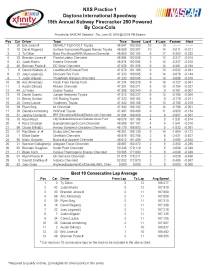