Rick Allen, the lead announcer for NBC Sports’ NASCAR Sprint Cup and Xfinity Series race coverage, joined the NASCAR on NBC podcast to discuss his circuitous route to becoming one of the sport’s most recognizable voices.

While competing as a decathlete who once was ranked in the top 10 in the world and trained for the 1992 Olympics with bronze medalist Dave Johnson, Allen discovered his calling for PA announcing. After a stint as the PA announcer for the University of Nebraska, Allen moved into NASCAR broadcasting and joined NBC Sports in 2014 (“I’ve lived probably three really distinctly different parts of my life”).

He explains how he handles the serious and uncertain moments of racing (such as Austin Dillon‘s crash at the end of last year’s Coke Zero 400 at Daytona International Speedway), but he embraces its chaos.

“I’ve always felt comfortable,” he said. “I think under pressure situations, I think clearer. I feel like when the intensity is really high, I think I have better focus.

“The very first race we have on NBC goes rain delayed for almost eight hours, and the way it ends, we think that someone dies. That chaos, I knew I’m not going to say the wrong thing. That’s in me. I know the situation and the magnitude and how to convey that. I have a lot of confidence that I believe I’m in the right job.” 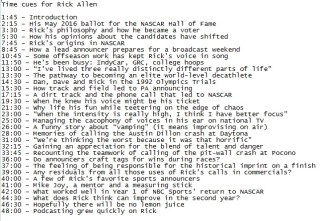