The No. 48 Chevrolet of Jimmie Johnson will have a special tribute during this weekend’s race at Daytona International Speedway.

A decal will be placed on the car honoring Antonio Brown, one of the 49 people killed in the June 12 Pulse club shooting in Orlando, which is about 60 miles south of Daytona Beach.

Brown, 30, was a human resources manager at a Lowes’ store in Fern Park, Florida. Brown was also a former U.S. Army captain who served in Kuwait during the Iraq War.

The decal is below. 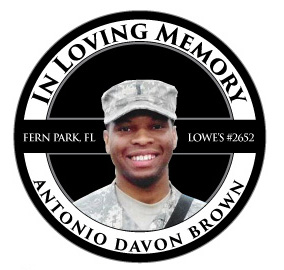