Even with his win Sunday at Sonoma Raceway, Tony Stewart isn’t yet on the grid for the Chase for the Sprint Cup. He has to make it into the top 30 in points before he’s eligible.

The three-time champion is currently 32nd, nine points back from the 30th. The last time he won the championship in 2011, Stewart entered the Chase after a mediocre performance in the regular season.

How has Stewart’s performance this season compared to the same stretch in 2011?

The only difference between 2011 and 2016 is that the Southern 500 fell in that stretch in 2011. Now Talladega occupies that window while Darlington is in September.

On the Chase grid, Ryan Blaney has dropped out of the top 16 and is three points behind Kasey Kahne, who entered the top 16.

Kyle Larson has entered the top 20 and is 30 points back from the cutoff spot. 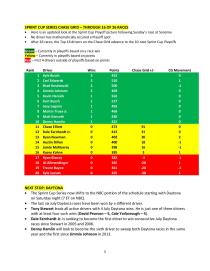