Rebounding from a back injury that sidelined him from the first eight races, Tony Stewart ended an 84-race winless streak by winning the Toyota/Save Mart 350 at Sonoma.

The three-time series champion banged past Denny Hamlin in the final turn of the road course for his first Sprint Cup victory in more than three years. 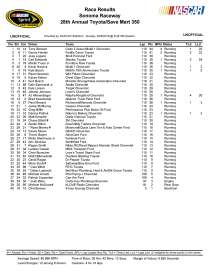