But there is good news: weather forecasts predict the rain will soon depart the area and that the race will go on as scheduled starting at 8:30 p.m. ET. The race will be televised live on Fox Sports 1, and will be broadcast live on the radio on Motor Racing Network and SiriusXM NASCAR Radio.

Because qualifying was cancelled, the starting lineup has been set per the NASCAR rule book, using combined practice speeds. Because Ben Rhodes was the fastest in both practice sessions earlier in the day before the rain came, he will start from the pole on the 200-mile race, while Johnny Sauter is on the outside of the front row.

Here’s the starting grid, as set by NASCAR’s rulebook: 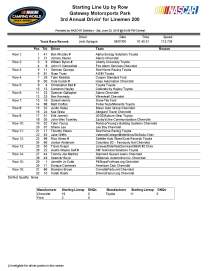