The Camping World Truck Series has a standalone race this weekend at Gateway Motorsports Park in Madison, Illinois.

There are 34 trucks on the initial entry list for the Drivin’ for Linemen 200.

With the Sprint Cup Series at Sonoma Raceway, there are no Cup drivers entered into the race.

Cole Custer is the defending winner at Gateway, which has hosted 15 Truck races since 1998. This will be the third Truck race after a three-year absence.

Rookie William Byron will seek to win his third race in a row. That hasn’t been done since Kyle Busch – who owns Byron’s truck – did it at Kansas, Charlotte and Dover in 2014.

Erik Jones, the 2015 Truck series champion, makes his first start of the year in the series, driving the No. 51 for Kyle Busch Motorsports. 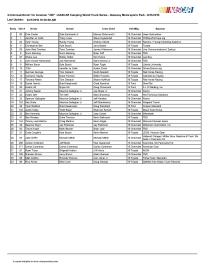