With the Sprint Cup Series off, the Xfinity Series get to play on a Sunday. They’ll compete in the American Ethanol E15 250 at Iowa Speedway.

START: Chris Schwarck Board Member of Absolute Energy and Big River Resources, will give the command for drivers to start engines at 1:37 p.m. Green flag is set to wave at 1:44 p.m.

PRERACE SCHEDULE: The Xfinity Garage opens at 10 a.m. The driver/crew chief meeting is at 12:15 p.m. Driver introductions are at 1:05 p.m.

TV/RADIO: FS1 will broadcast the race with its coverage beginning at 1:30 p.m. (NASCAR RaceDay airs at 1 p.m.). Motor Racing Network’s broadcast on radio and at MRN.com begins at 1 p.m. SiriusXM NASCAR Radio will carry the MRN broadcast.

FORECAST: wunderground.com predicts a temperature of 88 degrees with a 0 percent chance of rain at the start.

LAST TIME: Ryan Blaney led 252 of the 260 laps in the August race that went beyond its scheduled distance of 250 laps. Regan Smith was second with Brian Scott third. Chris Buescher took the lead with two laps to go to win the May race. Chase Elliott was second with Erik Jones third. 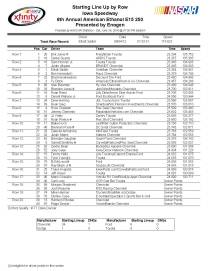