Shortly after being named NASCAR’s “most stylish driver” by GQ, Landon Cassill joined the NASCAR on NBC podcast to discuss his unconventional approaches to social media and promotion.

Cassill, who recently appeared on YouTube’s Gary Vee Show and sat courtside for Game 3 of the NBA Finals (in an appearance that gained traction on social media), has turned up in some unlikely places for a NASCAR driver, and some of it is by design. While the Cedar Rapids, Iowa, native hasn’t won in NASCAR’s national series, he has become a fixture in the Xfinity and Sprint Cup series over the past five years by grinding out consistent results with mid-tier teams.

The key to keeping a spot, though, is sponsorship, and Cassill believes in ensuring he can gain attention while working to build results. It’s why he has lobbied Front Row to consider hiring a film crew to follow him in the garage, guaranteeing some form of exposure that would help keep pace with teams whose success brings coverage.

“I like getting involved in media outside the traditional space in our sport,” Cassill said. “It’s cool to have the conversation with people who don’t really pay attention to our sport about NASCAR. It’s definitely good for me. It’s good for our sponsors.”

–His racing roots and what Iowa Speedway has meant to his native state;

–How Malcolm Gladwell’s 10,000-hour rule might apply to racing;

–Earning compliments from the Sprint Cup establishment and how that could help his career.

You can listen to the podcast by clicking below or download the AudioBoom app and listen there. You also can download and subscribe to it on iTunes by clicking here. The free subscription will provide automatic downloads of new episodes to your smartphone. It also is available on Stitcher by clicking here.

Here are time cues to provide easy referencing while listening to the episode: 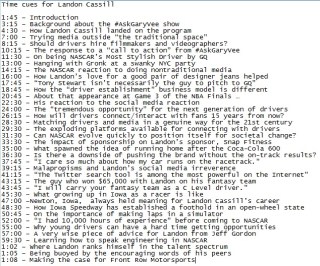