The NASCAR Sprint Cup Series runs its final race before taking Father’s Day weekend off. The series is at Michigan International Speedway for today’s FireKeepers Casino 400.

Here are the details on today’s race:

All times are Eastern:

START: Miesha Tate, UFC women’s Bantamweight champion, will give the command for drivers to start engines at 1:07 p.m. Green flag is set for 1:16 p.m.

PRERACE SCHEDULE: Sprint Cup garage opens at 7 a.m. Driver introductions begin at 12:25 p.m. The Canadian Anthem will be performed by Three Men and a Tenor at 12:58 p.m. The invocation will be given at 1 p.m.

NATIONAL ANTHEM: Will be performed by Three Men and a Tenor at 1:01 p.m.

FORECAST: wunderground.com predicts a high of 71 degrees with 0 percent chance of rain at the start. 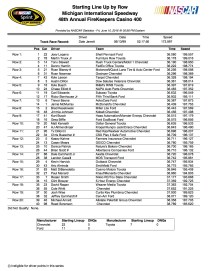