Dale Earnhardt Jr. maintained his position in the Sprint Cup points standings Sunday at Michigan International Speedway, but he lost some security in the battle for a NASCAR playoff spot.

After a 39th — his sixth finish outside the top 10 in the past seven starts — Earnhardt remained ranked 11th in the standings amid an increasing log jam among winless drivers for provisional berths in the 16-driver Chase for the Sprint Cup field.

With Joey Logano becoming the 10th winner to nail down a playoff spot, Earnhardt is among six winless drivers still on the current Chase grid. But he is 30 points ahead of 17th-ranked Kasey Kahne after enjoying a 47-point cushion off his runner-up finish at Pocono. There are 11 races remaining to set the field for the playoffs.

Tony Stewart, who is trying to make the top 30 in points after missing the first eight races with a fractured back, moved up a spot to 35th in the points with a seventh at Michigan. Stewart is 45 points behind 30th-ranked Brian Scott after trailing the 30th spot by 71 points after Pocono. 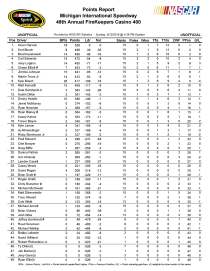