Teams lose their pit stall selection after every fourth warning. Since Truex’s fourth warning came before pit stalls were picked at Michigan, the penalty is enforced this weekend.

FS1 reported that Truex’s car was among the final four to get through inspection before Friday’s qualifying, which was delayed 15 minutes because so many teams had not passed inspection.

Truex, who qualified second and would have had the second pick of pit stalls, finished with pit stall No. 13. He’ll have AJ Allmendinger in front of him and Jamie McMurray behind him.

Regan Smith‘s Tommy Baldwin Racing team received its fourth warning last week at Pocono and lost its pit stall pick for this weekend. He’s in pit stall No. 7 with Brad Keselowski in front of him and Kyle Busch behind him. 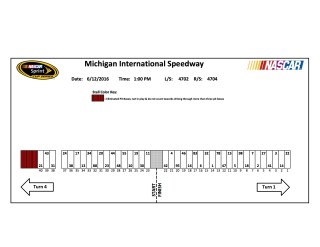