FORT WORTH – With a speed of 180.024 mph around Texas Motor Speedway, Johnny Sauter clinched his first pole in the Camping World Truck Series since 2013.

Sauter, in his first season with GMS Racing, earned his sixth career pole and his third at Texas. He last pole came at this 1.5-mile trace.

Sauter is joined on the front row of the Rattlesnake 400 by German Quiroga, who is competing in his first Truck race since the 2014 finale at Homestead-Miami Speedway. It is Quiroga’s best start since winning his lone pole in the series in 2013 at Iowa Speedway.

Sauter’s pole is his first start from the front row since the season opener at Daytona, which Sauter won. 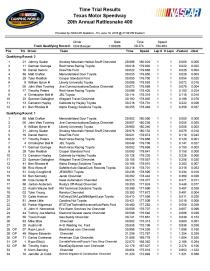