“It just feels really good because the last couple of weeks we’ve come in second in the final round,” Logano told FS1 after winning his second pole of the year and 16th of his Sprint Cup career. “It’s nice to break through and get a pole.”

Logano will be joined by Martin Truex Jr. on the front row for Sunday’s race.

“I’m glad that was the last time I had to do that today,” Stewart said. “It felt really good.  We were really loose in practice and Mike (Bugarewicz, crew chief) did a great job in the break there of making some big changes to get us caught up. It got my confidence back there and made me feel like I finally had the right-rear (tire) in the track there.  Now we can hustle a little bit.”

Kurt Busch, who won Monday’s race at Pocono and this race a year ago, starts 17th.

The first round of qualifying was delayed 15 minutes because so many teams had not gotten through inspection. When qualifying began, FS1 reported that the cars of Brad Keselowski, Michael Annett, Greg Biffle and Truex were still in inspection.

The first round was halted by two cautions. One was for debris and the other was for David Ragan‘s crash. Both times Kevin Harvick was on the track seeking to make his qualifying lap and could not complete the lap. When he finally got the chance, he did not advance to the second round. Harvick will start 29th in the 40-car field.

“Common sense was pretty low on when to throw the caution,” Harvick told FS1 in regards to the debris caution. “Debris up out of the groove. We’ll be fine. There’s really not much you can do about that.”

Dale Earnhardt Jr. will start 27th. It marks the fourth time he has started 25th or worse this season.

“We were  pretty good in practice,” Earnhardt told FS1. “We got really loose into Turn 3 on the first run. We made some adjustments that really just didn’t help us any. Went out there and it was worse. We’ll be all right. It’s a good wide racetrack. It’s frustrating because when we showed up we had good speed. Just trying to get qualifying a little bit better.” 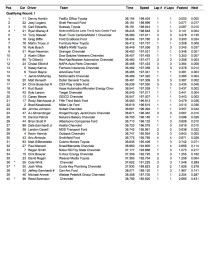