After a hard-fought and controversial third-place rally Monday at Pocono Raceway, Brad Keselowski joined the NASCAR on NBC podcast and set the record straight on his team’s penalty.

“I would kind of equate it to holding (in football). Did it impact the play or the race? Absolutely not. Was it wrong? Yes. … The other reason why I probably would draw an equivalence to holding is there’s probably holding on every play. You have to draw the line somewhere. If I’m NASCAR, I agree with them drawing the line. I, of course, hate that it was us. But they have to set a line.”

In a wide-ranging conversation, the 2012 Sprint Cup champion also offered perspective on joining the Sprint Cup Drivers Council this year.

“Every driver has a role of trying to make sure their sport stays relevant beyond themselves,” he said. “When I think of the Drivers Council, it doesn’t have a mission statement, but if I was to try to create a mission statement, one of the first things I’d think of putting in that mission statement is we are going to do things for the sport that probably won’t help it in our time in it as drivers.

“And that’s so hard to do because we get caught up thinking small term of ‘What can we do better tomorrow?’ But the big stuff is, ‘Where are we going to be in 10 years?’ So the council gives us a format to have these really big conversations to find solutions.”

–The Team Penske philosophy of building speed through incremental gains and how difficult it is to strike the balance between patience and faith while trying to stay ahead of a playing surface that changes every week;

–His view of journalism in NASCAR;

–Why Sprint Cup cars also could be considered Transformers.

–His beginnings in the Greater Detroit area and how training in his dad’s race shop taught him life lessons (“it’s inherent to that community that your work ethic must be at a very high level.”).

The podcast also is available on AudioBoom: 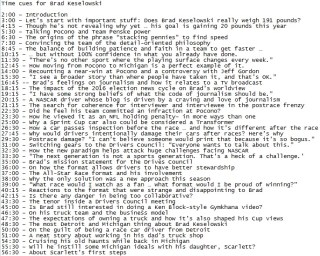