The three-time series champion, who is trying to reach the top 30 in points to become eligible for the Chase for the Sprint Cup, lost ground with a 34th because of a crash in the Axalta We Paint Winners 400. Stewart, who missed the first eight races with a fractured back, dropped a spot to 36th in the standings, 71 points behind 30th-ranked David Ragan. With 12 races remaining in the regular season, Stewart still would need a victory to accompany his surge into at least 30th to qualify for the playoffs.

Kurt Busch became the ninth winner of the 2016 season to clinch a provisional berth in the 16-driver playoff field, which is filled first by drivers with victories and then by points. The seven highest-ranked winless drivers who currently would be in the Chase are: Chase Ellliott (who gained a spot to seventh in points); Joey Logano (up a spot to eighth); Dale Earnhardt Jr. (11th after improving two positions), Austin Dillon (13th), Jamie McMurray (14th), Ryan Blaney (15th) and Ryan Newman (16th).

A.J. Allmendinger is 17th in the standings, four points behind Newman for the current last position in the Chase.

Here are the points after Pocono: 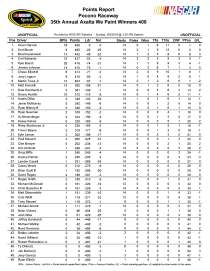