Twenty-eight of 40 cars took to the track before rain shortened the session. That means if Sprint Cup qualifying later today also is impacted by weather, the starting field would not be set by practice speeds.

The first of two scheduled Xfinity Series practice sessions also was impacted by rain and did not start as scheduled at 12:30 p.m. ET.

Track dryers are on the 2.5-mile tri-oval, attempting to dry the racing surface.

Additional rain is in the forecast for today, which could play havoc with the second scheduled Xfinity Series practice (3 – 3:55 p.m. ET), as well as Sprint Cup qualifying, scheduled for 4:15 p.m. ET.

Here’s how the abbreviated first practice session played out: 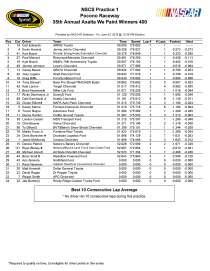