Newly elected Hall of Famer Mark Martin joined the NASCAR on NBC podcast ahead of his Wednesday appearance on NACAR America, discussing his career in racing and afterward.

The 40-time Sprint Cup winner explained why he didn’t attend a NASCAR race between his final start in the 2013 season finale at Homestead-Miami Speedway until his return to drive the pace car in Sunday’s Coca-Cola 600 at Charlotte Motor Speedway.

“You guys might laugh at me, and say, ‘Dude’s crazy,’ which obviously I am,” Martin said. “But as a race car driver, I didn’t feel I had a place at the racetrack anymore. Where would I watch from? What would I do? How would I get passes for a racetrack?

“It’s weird. If you don’t have a job there … I felt strange about going to a race.”

That’s changed with his induction next year in the eighth class of the NASCAR Hall of Fame. Martin recently received an annual credential from NASCAR, and he expects to be attending more races to help promote the museum and its induction ceremony.

“It does make a difference,” he said of being an inductee. “I assume the races I go to, I’ll have invitations to go and have things to do. I am a huge fan. I watch on television, but to go there in person with nothing to do … It just didn’t make sense to me.”

–Why his knowledge of what made his car work had as much to do with his NASCAR success as his driving talent;

–His new life exploring the country in his motorhome (which he put 16,000 miles on last year). 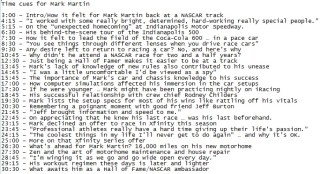