There will be two more practice sessions on Friday. This is the first time the Xfinity Series has ever raced at Pocono. 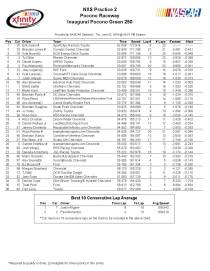