Joey Logano‘s throwback scheme for the Southern 500 brings back sponsor Shell’s first primary sponsorship look in the mid-1990s to celebrate the 20th anniversary of its first win.

Bobby Labonte took Shell to victory in 1996 at Nashville Speedway in what is now the NASCAR Xfinity Series. Labonte also was the car owner. Labonte brought the Shell sponsorship to Joe Gibbs Racing and drove the same paint scheme to victory in his final win for Shell in 1998.

“I think it’s a no brainer to help celebrate Shell’s 20th anniversary of NASCAR involvement and run this cool paint scheme at Darlington on Labor Day,” said Logano in a media release. “It’s pretty neat that Shell is celebrating 20 years in NASCAR and even cooler that Bobby (Labonte) won at Darlington Raceway with this car, so it’s a huge honor for myself and everyone at Team Penske to run this look. Heritage is a main theme in everything we’re doing this year and it’s been great to have the support from Shell-Pennzoil in running paint schemes to help us commemorate the heritage of our team and the heritage of our sport.”

Here’s how Labonte’s car looked and how Logano’s car will look: 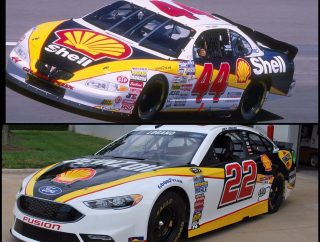