The 57th Coca-Cola 600 is scheduled to be run today at Charlotte Motor Speedway.

Martin Truex Jr. will lead the field to green.

Here’s everything you need to know about the longest NASCAR race of the year.

START: The command to start engines will be given at 6:09 p.m. by Retired General George W. Casey and 75 Service Members and USO Volunteers. Green flag is set for 6:18 p.m.

PRERACE SCHEDULE: Winston Kelly will introduce the 2017 NASCAR Hall of Fame class at 5:19 p.m.  Driver introductions begin at 5:20. The invocation will be given at 6 p.m. by Frank Harrison. Four F-15 Eagle fighter jets from Seymour Johnson AFB will conduct a flyover at 6:05 p.m.

NATIONAL ANTHEM: Will be performed at 6:03 p.m. by the 82nd Airborne Division All-American Chorus.

TV/RADIO: Fox will broadcast the race with its coverage beginning at 5:30 p.m. Performance Racing Network’s broadcast on radio and at goPRN.com, begins at 5 p.m. SiriusXM NASCAR Radio will carry the PRN broadcast.

FORECAST: wunderground.com predicts an overcast sky with a temperature of 77 degrees and a 15 percent chance of rain at the start time. 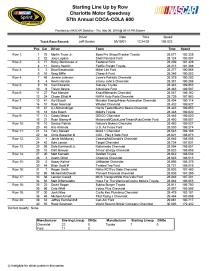