CONCORD, N.C. — Overcoming a pit penalty and a furious last-lap battle with Kyle Larson, Denny Hamlin charged to a victory in the Hisense 300 at Charlotte Motor Speedway.

Austin Dillon finished second, followed by Joey Logano, who started alongside Kyle Larson on the front row for the two-lap restart in overtime. Cole Custer (fourth) scored his first top five in the Xfinity Series, and Justin Allgaier was fifth.

Logano and Larson were the only lead-lap drivers who didn’t pit during the last yellow flag. Larson smacked the wall while racing with Hamlin and finished sixth.

Hamlin’s No. 20 Toyota fell to 14th with about 40 scheduled laps remaining after a penalty for an uncontrolled tire on a pit stop. 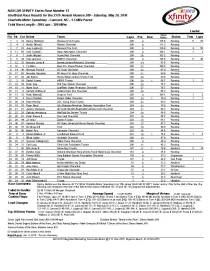