With the annual Memorial Day weekend tripleheader on tap Sunday for motorsports’ biggest day of the year, the NASCAR on NBC podcast welcomed a tripleheader of vaunted guests for its latest episode.

The roster includes the past two winners of the Indianapolis 500 – Juan Pablo Montoya and Ryan-Hunter Reay – and the man voted the greatest crew chief in NASCAR history by a 2006 media poll – Ray Evernham.

Montoya won last year at the Brickyard in his second start with Team Penske, marking the longest gap between Indy 500 victories (having won his first start at the 2.5-mile track in 2000).

The Colombian once viewed Indianapolis as just another track, but his viewpoint has shifted through the passion of his car owner, who has a record 16 Indy 500 wins.

Feeling the withering drive of Penske, Montoya laughs that he prefers to stay inside his motorhome to stay focused on the task at hand.

“It feels so different,” Montoya said. “I actually spend a lot of time in the bus … because it’s so intense. Thursday, someone turned on the light. The intensity level goes up and everyone starts getting more serious, more serious, more focused.”

Hunter-Reay, who outdueled Montoya’s teammate, Helio Castroneves, to win in 2014, will start third Sunday at Indy. He discussed his chances this season and his son’s passion for racing.

Having restored a car for Indy legend Mario Andretti that will be driven in a prerace parade at the Brickyard, Evernham is in Indianapolis this weekend as well to watch the 100th running of the Indy 500. The NBCSN analyst previewed the Coca-Cola 600 at Charlotte Motor Speedway, explaining how tire wear could impact the longest race of the season. 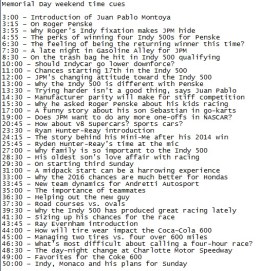