The last time Martin Truex Jr. earned a Sprint Cup pole, it ended a four-year wait since his previous one. On Thursday, Truex grabbed the pole for the Coca-Cola 600, just three weeks after his last pole at Kansas Speedway.

Truex earned the pole for the 57th Coke 600 with a speed of 192.328 mph, which knocked Joey Logano from the top spot in the third round of qualifying.

The pole comes a year after Truex led 131 laps in the longest race of the year. Pit strategy relegated the No. 78 to a fifth-place finish.

“I liked what I felt last year, I’ve been thinking about this race a lot since then,” Truex told Fox Sports 1. “We really had to work hard today. We were not that good in practice.”

In the first practice session for the Coke 600, Truex finished with the seventh best speed. Kurt Busch, who was fastest in that session, didn’t advance out of the second round and will start 13th.

“The cars have been so good and we’ve had a really great season,” Truex said. “We don’t have a lot to show for it, but we’ve got a lot of confidence, a lot of momentum.”

Logano had been the fastest through the first two rounds of qualifying and will start on the front row for the fifth time this season. His only pole came at Martinsville Speedway.

“It was interesting to see how we kept going faster, that means the track was gaining more grip than the tire was wearing out,” Logano told Fox Sports 1. “It’s kind of a chess match, a guessing game on what you’re going to do inside your car and how far you can push it and what the adjustments need to be.”

The top five for the Coca-Cola 600 is Truex, Logano, Ricky Stenhouse Jr., Denny Hamlin and Brad Keselowski. Stenhouse’s start will be his highest since starting second in the 2013 fall race at Kansas Speedway. 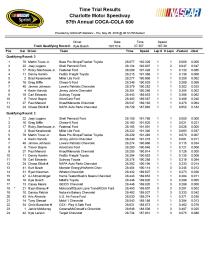 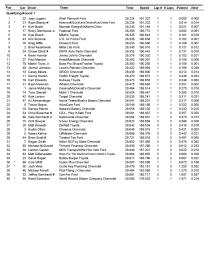