Venerable team owner Roger Penske, who turned 79 in February, made a visit to the infield hospital last week at the Indianapolis Motor Speedway.

This wasn’t a checkup to determine if Penske, who remains as spry as ever with his racing organization in its 50th year, was at risk of slowing down as he nears his ninth decade.

This was to ensure he could speed up, hammering the accelerator of the 2017 SS Camaro pace car that will lead the field to green Sunday in the 100th running of the Indianapolis 500.

“I guess before you can drive on this racetrack, you need to have a physical,” Penske said with a chuckle during the Wednesday episode of the NASCAR on NBC podcast. “So the good news is I passed my physical, so I guess I’ll now be able to drive the car on race day.”

There was a time when he would have been racing it.

Though he has become synonymous with success in fielding cars – his teams have won a record 16 Indy 500s – Penske started his legendary career in racing as a driver and was named Driver of the Year in 1961 by Sports Illustrated and in 1962 by the New York Times.

Though he hung up his helmet for good in 1965 to focus on his automotive empire, Penske once won a NASCAR race at Riverside International Raceway in 1963, and he discusses those memories from his driving career during the podcast – including another NASCAR race he nearly won at Indianapolis Raceway Park.

“I was leading with about 10 laps to go and lost the rear end and then went out and won the race at Riverside,” he said, laughing. “When I came back (to Indianapolis), they didn’t want to let me in the Speedway because I’d driven a NASCAR car.”

Other topics covered by Penske:

–His team’s success since combining its IndyCar and NASCAR operations under one roof;

–His potential future plans for returning to sports cars;

–Why he believes “anything you want, you can get it.”

–What he believes the future holds for IndyCar, NASCAR and auto racing. 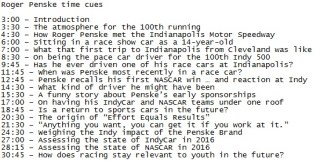