Last week Kasey Kahne and Great Clips held a vote for fans to choose what paint scheme the Hendrick Motorsports’ driver would have for the Coke Zero 400 in July at Daytona International Speedway.

The vote was among four designs created by patients at the Seattle Children’s Hospital as part of its “Strong Against Cancer” program.

Kahne later revealed the winner of the contest, which was designed by an 8-year-old named Noelia from White Center, a suburb of Seattle. The paint scheme can be seen on July 2 on NBC.

Below is how the car will look in the race and the original design.

Congrats to Noelia from @seattlechildren your design won and will be on our @GreatClips car at Daytona 😎 pic.twitter.com/KlJ7AU13MN 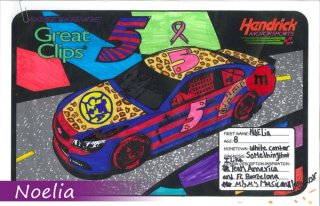