Kyle Larson will race in his first Sprint All-Star Race after coming out on the better end of a drag race with Chase Elliott in the third segment of the Sprint Showdown.

Larson fended off multiple pass attempts by Elliott before locking doors with the rookie coming to the checkered flag.

After the sparks and smoke, it was Larson advancing to the All-Star Race while Elliott got in on the Fan Vote. It’s Larson’s first All-Star Race in three seasons in the Sprint Cup Series.

Elliott started the final segment deep in the field and after passing four cars on the first lap, had put his No. 24 Chevrolet within a car length of Larson with three laps to go.

Elliott pulled even with Larson on the frontstretch with two laps to go and was about to complete the pass entering Turn 1 when Larson lightly touched his right-rear quarter panel. That got Elliott loose enough for Larson to pull back ahead.

On the final lap in Turns 3 and 4, Elliott went high, again pulling even with Larson entering the tri-oval. That’s when the door banging started.

“I hate racing like that, sucking on people’s doors,” Larson said.

Said Elliott:”He did what he thought he had to do to beat us back to the line.”

They entered Turn 1 with significant sheet metal damage to both cars.

“Hopefully they can repair the right side good enough, or we can pull out a backup,” Larson told FS1. “I’m sure Chase is angry with me. He has all the reason in the world to be. But hey, later tonight, we’ll be going for a million bucks, and I’ve never had the chance to do that before.”

Larson joined Greg Biffle and Trevor Bayne as segment winners who advance to the All-Star Race. Danica Patrick, who finished ninth, also transferred by finishing second in the fan vote.

The top five of the final segment was comprised of Larson, Elliott, Ryan Blaney, Aric Almirola and AJ Allmendinger. 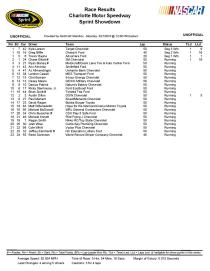