Rain limited the NASCAR Camping World Truck Series to one practice instead of three Thursday at Charlotte Motor Speedway.

Timmy Hill reported he cut a right front tire and stated in a tweet that the “damage is pretty bad.” He was 34th on the speed chart among 36 drivers. 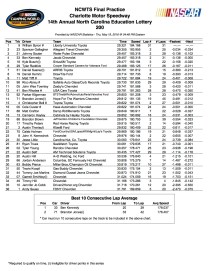