If the new rules in place for Saturday’s Sprint All-Star Race allow for “an opportunity to make a bold and dumb move,” Denny Hamlin said it’ll be a success.

“That’s what we want as drivers,” the reigning Daytona 500 winner said in the latest edition of the NASCAR on NBC podcast. “If the person in front of us has to lift for an extended period of time or has to use brake, the person behind has an opportunity to drive in there.

“If we’re all just running a lot of on throttle, how does the person behind ever get in front of the person in front if he’s wide open? Slowing the cars down gives us a chance to take chances and put on a better show for the fans.”

The tweaks made for the All-Star Race are expected to slow the cars down by about 6 mph in the corner while reducing the impact of sideforce (which sent Hamlin spinning after an aggressive move at Kansas Speedway two weeks ago).

Hamlin is hoping that it could be a step toward speeds eventually dropping by 15 to 20 mph.

“From the fans standpoint, they want great side-by-side racing and drivers who make mistakes and pay the price,” he said. “Ultimately the faster we go, even though it looks great putting up track records, track records are bad for racing. I’m all for going 250 on the straightaway if we’re back to 150 in the middle of the corner. That variance in speed is what we’re trying to separate.”

Among the other topics discussed by the Joe Gibbs Racing driver:

–His approach to the radical format changes in this year’s race and how it might affect strategy;

–An upcoming paint scheme that Hamlin will be designing;

–What the Sprint Cup Drivers Council is learning about beyond competition;

–How Kyle Larson might be feeling after Dover International Speedway.

In the second half of the podcast, Dustin Long, the NASCAR editor for NBCSports.com, discusses the ramifications of Larson’s clean battle with Dover winner Matt Kenseth. 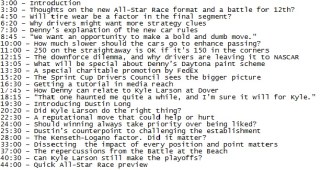