With his win at Dover International Speedway, Matt Kenseth became the first driver to qualify for the Chase for the Sprint Cup in the last five races.

There have now been seven different winners through the first 12 races of the Sprint Cup season. With Denny Hamlin‘s poor performance since winning the Daytona 500, Kenseth was able to move up eight spots on the latest Chase grid to sixth, ahead of Hamlin.

Chase Elliott, who finished third Sunday for a career-best result, moved up three spots on the grid to ninth. The only driver ahead of him on the gird who hasn’t won a race is Kurt Busch. Busch is the only driver with 10 finishes in the top 10 through 12 races.

Dale Earnhardt Jr. and Austin Dillon had the biggest drops, each falling three spots to 13th and 12th, respectively.

The first four drivers out of the 16 spots that will qualify for the Chase are AJ Allmendinger, Ryan Newman, Trevor Bayne and Ricky Stenhouse Jr. 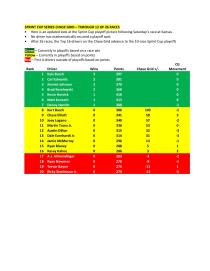