Matt Kenseth scored his third victory at Dover International Speedway, winning the AAA 400 Drive for Autism to secure a provisional berth in the Sprint Cup playoffs.

Kenseth, who had several near-misses at wins this season starting with losing the lead of the Daytona 500 in the final corner, held off several furious charges by Larson for his 37th career victory in NASCAR’s premier series. It was the seventh victory in 12 races this year for Joe Gibbs Racing, which has reached victory lane with all four of its drivers (Kenseth, Kyle Busch, Denny Hamlin and Carl Edwards). 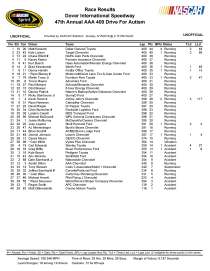 “It was just a really good race car.,” Truex told Fox Sports. “Last year was a pretty rough season for us with no wins. To kick it off this way was great for these guys. We found ourselves in the right spot at the end.”

The second half of the race was pockmarked by contact and subsequent spins as the field was slowed time after time for cautions. The yellow flag flew 16 times across the race’s 150 laps.