Third-place finisher Chase Elliott was the big mover in the Sprint Cup points standings Sunday at Dover International Speedway, leaping four spots to seventh with his fourth top five of 2016.

Among winless drivers in the rankings, the Hendrick Motorsports rookie trails only Kurt Busch, who improved two spots to third in the points with a fifth at Dover.

The 16-driver field for the playoffs will be set by drivers who have victories and then by winless drivers in the points standings after the 26-race regular season. Kevin Harvick and Kyle Busch remained in the top two spots in the points through 12 races.

Tony Stewart, who missed the first eight races with a fractured back, remained 37th in the standings, but he lost ground his his long-shot bid for Chase for the Sprint Cup eligibility.

The three-time series champion needs to finish the regular season in the top 30 in points with a victory if he wants to qualify for the playoffs in his final season.

With a 34th at Dover because of a track-bar problem, Stewart lost eight points on the gap to 30th. He is 67 points out of the cutoff spot with 14 races left in the regular season.

Here are the points standings after Dover: 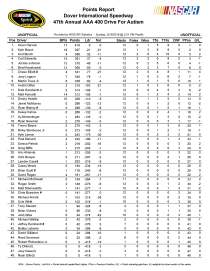