The second Dash 4 Cash heat race at Dover International Speedway was won by Ty Dillon. Dillon outran Daniel Suarez in a six-lap shootout to claim his second heat race win of the season in the Ollie’s Bargain Outlet 200. Both drivers qualified for the Dash 4 Cash.

Suarez, who started first, led until a restart on Lap 34. The restart was the result of the first caution during a heat race this season. This was the sixth heat in the new format, which was introduced for four Xfinity Series races.

On Lap 27, the caution flew when Justin Marks, running sixth, got loose exiting Turn 4. His No. 42 Chevrolet slid into the inside wall before going back up the track, slamming into the outside wall and then coming to a rest back against the inside barrier.

Hard crash for Justin Marks in the #42 at #XFINITYSeries pic.twitter.com/yGi7tUzWeB

The caution was not lifted until four laps to go due to safety crews having to extract the splitter from Marks’ car from underneath the outside wall.

Dillon’s win in the heat race follows his heat win at Richmond International Speedway. Dillon will start the 120-lap main next to Justin Allgaier, winner of the first heat. 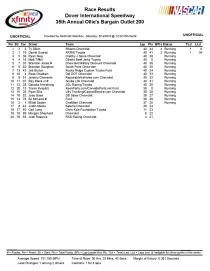