Here’s what you need to know about the race:

TV/RADIO: Fox will broadcast the race with its coverage beginning at 2 p.m. Motor Racing Network’s broadcast on radio and at MRN.com, begins at 1:30 p.m. SiriusXM NASCAR Radio will carry the MRN broadcast.

FORECAST: wunderground.com predicts a temperature of 73 degrees and a 15 percent chance of rain at race time. 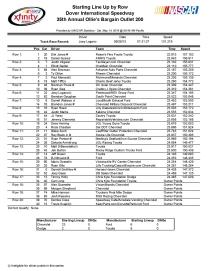