Both Allgaier and Jones qualified for two of the four Dash 4 Cash spots in the 120-lap main event. This is the first time in the three Dash 4 Cash events that Jones hasn’t won a heat race.

Allgaier led the first 21 laps before Jones, the pole-sitter for the Ollie’s Bargain Outlet 200, caught and passed the No. 7 Chevrolet on the outside in Turn 2. Allgaier executed the same move nine laps later.

“The biggest thing is the track is changing as we go,” Allgaier told Fox Sports. “Now we just have to go do it for another 120 laps. It’s not going to be quite so easy. Huge props to Erik, that was a fun race. He kind of showed me the top a little bit and was able to move it up there and make our car a little better.”

Results for heat race No. 1 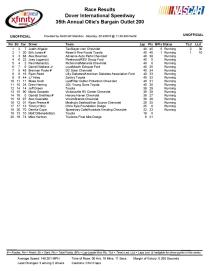