As a result, the field will be set according to the NASCAR rule book, combining the speeds from both of Thursday’s practice sessions. Rookie William Byron, who won his first Truck series race last week at Kansas Speedway, will start from the pole.

Byron is joined on the front row by fellow rookie Brandon Jones, which is Jones’ best start in 26 races.

The top five is filled out by Matt Tifft, Cameron Hayley and Matt Crafton.

Failing to make the race is Austin Cindric and Norm Benning. 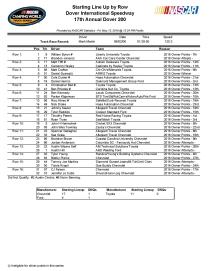