Stewart, Danica Patrick and Jamie McMurray were involved in the incident that started when Patrick’s car dumped oil after what the team said was a gear failure. Stewart and McMurray lost control when they ran through the oil and hit the Turn 4 wall hard. All were evaluated and released from the infield care center. Each had to go to a backup car and made it back on track before the session ended. 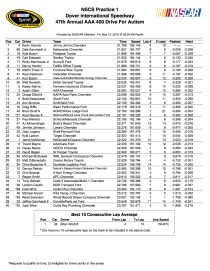