The session featured three accidents that caused each team to go to a backup car.

Darrell Wallace Jr. hit the wall in the opening minutes of practice and went to a backup car. About 10 minutes later, Jeb Burton‘s car snapped around off Turn 4 and his car slid head-on into the inside wall on the frontstretch. He also had to go to a backup car.

Paul Menard appeared to have something fail, sending him up the track and into the Turn 3 wall less than 30 minutes into the session. He went to a backup car. 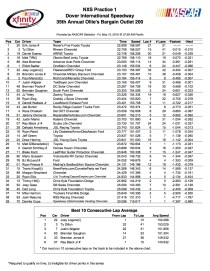