Team Penske is the only auto racing organization to field teams in the NASCAR Sprint Cup and IndyCar series out of the same building.

A mammoth building of more than 400,000 square feet in Mooresville, North Carolina.

In the latest NASCAR on NBC podcast, team president Tim Cindric explains the origins of the ambitious undertaking, the initial struggles with melding the philosophies of divergent racing disciplines and the lessons learned and provided by team owner Roger Penske.

“It was a challenge for sure,” Cindric said of moving the IndyCar operation to Mooresville in 2007. “But now when we look at it, we have very like-minded people. The IndyCar group is very complimentary of the NASCAR group and vice versa.

“We cross-pollinate and move people from A to B, and it’s not like they’re having to move to another country. They’re just moving to another assignment in the same facility.”

Cindric was interviewed at the team’s headquarters, which has celebrated championships in IndyCar (2014, Will Power) and NASCAR (’12, Brad Keselowski) in the past five years.

Team Penske, which is in its 50th season, has a record 16 Indianapolis 500 victories and also has 28 national racing championships. On May 29, it’ll return to the Brickyard with four entries in the 100th running of the Indianapolis 500.

Other topics covered by Cindric:

–What the future might hold for Team Penske in returning to racing sports cars or a potential expansion into another series;

–How Penske’s IndyCar and NASCAR teams have collaborated on safety advances;

–His insight and relationship with Roger Penske, who hired Cindric more than 16 years ago.

Cindric said he is privvy to three sides of Penske: the billionaire entrepreneur, the visionary race team owner and the friend and mentor who has more of a sense of humor than publicly is recognized.

“There’s the integrity, there’s the class and all the things that go along with him, but there’s the way in which you get it done,” Cindric said of Penske. “You’ll never outwork the guy. When you look at work ethic, the example he sets, it’s unbelievable.

“He’s an example in so many different ways of the right way to do things. You learn the most when things happen in adversity. You learn the most about people. You watch him during adversity and how he handles it and what he does and how he approaches it. I’ve see the way he treats people, and the people who aren’t ever going to do anything for him, and what he does for those people is the best life lesson you can see.” 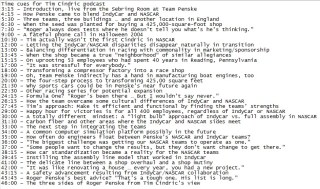